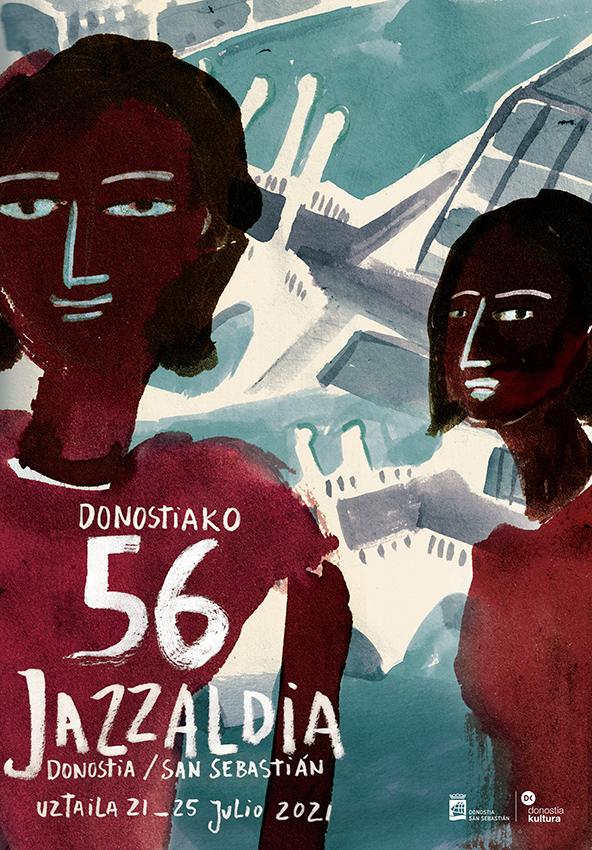 The 56th San Sebastian Jazz Festival, to run from July 21-25, now has its poster, work of the animator, director and animation producer, Isabel Herguera

The title of the poster is “Bye Bye Blues”. In the artist’s own words: “The poster is a farewell to the strange and painful year we have just lived through. It is also a homage to all of the women who have their place in the history of jazz past and present”.

Bye Bye Blues is, furthermore, a popular and jazz standard. Composed in 1925 by Fred Hamm, Dave Bennet, Bert Lown and Chauncey Gray, the song hit the charts with the version by Les Paul and Mary Ford in 1952. Although it has been performed by countless artists over the years, Isabel Herguera has taken two of these versions as her reference: the one by Julie London dating from 1957 and Cab Calloway’s 1940 instrumental.

Born in Donostia/San Sebastian in 1961. Studied at the Bilbao Faculty of Fine Arts, at the Kunstakademie in Dusseldorf, and completed her training at California Institute of the Arts. For a decade she worked at different animation studios in Los Angeles. In 2003 she returned to Europe and made several short films selected for festivals including Annecy, Rotterdam and Ann Arbor, among others.

She has given numerous courses and workshops at: California Institute of the Arts, Los Angeles; Escuela Internacional de Cine y Televisión de San Antonio de los Baños, Cuba; Central Academy of Fine Arts, Beijing. She was guest professor at the National Institute of Design in Ahmedabad, India. She also designed and coordinated the Moving Image Laboratory at Arteleku.

Herguera has been widely recognised, having won numerous awards for her animation work, among which are particularly La Gallina Ciega (nominated for the Best Animated Short Film Goya 2006), Bajo la almohada (Under the Pillow, UNICEF award at Zinebi 2012) and Amore d’inverno (Best Basque Film 2015).

From 2003 until 2011 she directed the International Animation Film Festival of Catalonia, in Lleida, an event which received the National Audiovisual Award from the Consell Nacional de la Cultura i de les Arts in 2009.

Today she alternates her teaching work at the Kunsthochschule für Medien in Cologne, Germany, with the production of her first feature film, El sueño de la sultana (Sultana’s Dream).