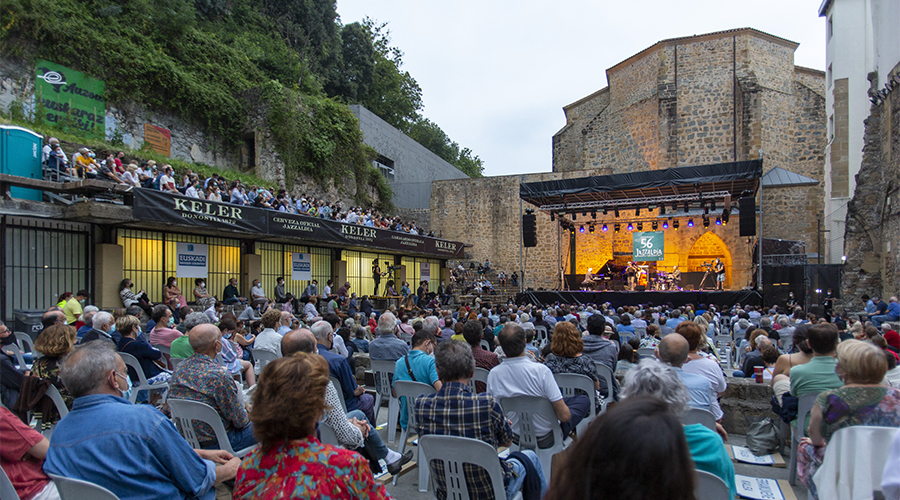 The 56 Jazzaldia was a huge success. Jazz aficionados displayed an exemplary response, with enthusiasm, buying up the tickets for all stages, behaving responsibly and obeying health and safety norms at all times.  Tickets were sold out for 15 of the 27 paying concerts: the 5 in the Trinitate Plaza Keler, the 5 in the Škoda San Telmo Museoa, 3 of the 5 concerts in the Kutxabank Kursaal Auditorioa, 1 in Chillida Leku and 1 in the FCC Victoria Eugenia Antzokia. Overall, 90% of all tickets were sold for the 27 paying concerts.

Trinitate Plaza Keler hosted 10 concerts when the audience completely packed out the venue.

First up were Dave Douglas and Franco D’Andrea, with a concert featuring an imaginative and marvellous musical dialogue. Closing the evening was Cécile McLorin Salvant, accompanied by the magnificent Sullivan Fortner on the piano.

On Thursday, July 22, we were treated to a fantastic Cuban soirée during which two pianists prevailed over San Sebastian’s persistent drizzle, known locally as sirimiri. The evening opened with Gonzalo Rubalcaba, in great form on the piano, and Aymée Nuviola with her impressive voice. The Cuban pianist, Chucho Valdés, moved to receive the same Donostiako Jazzaldia Award as had been presented to his father, Bebo Valdés, 18 years ago, went on to give a concert proving that he continues to hold a place among the best Latin Jazz pianists.

On Friday, July 23, we had the enormous pleasure of listening to two virtuosos on the piano: Marco Mezquida, on top form, bringing us his latest project, Talismán, and the master of masters, Kenny Barron, with a marvellous Jazz performance, accompanied by an equally inspired Steve Nelson on the vibraphone, a magnificent Peter Washington on bass and the colossal Jonathan Blake on the drums.

The evening of Saturday, July 24, was put on for us by two female performers: Naïssam Jalal with her Rhythms of Resistance, and the incomparable voice of Noa, accompanied by the guitar of Gil Dor and featuring the piano of Iñaki Salvador, delighted an audience filling the air with heartfelt magic and exquisite serenity. Finally, on July 25, the pianist Brad Mehldau, lyrical and extraordinary, and the guitarist Bill Frisell, with his accomplished and unique sound. The perfect icing on the cake for an edition at which Jazzaldia’s most symbolic stage once again offered unforgettable moments of the very finest artistic quality.

Audiences in the Kutxabank Kursaal Auditorioa enjoyed 5 great concerts: José James, loaded with style and charm, set the bar way up high right from the very beginning. Buika and her hugely personal style, enchanted an audience who had already snapped up all tickets several days previously. Jorge Pardo and Niño Josele took to the stage to pay an emotional tribute to their friend, recently deceased: the great Chick Corea. The brilliant Italian pianist Giovanni Guidi, fronting a stellar sextet, gave a concert considered by some as one of the best at this year’s Jazzaldia. And at the height of her maturity, Sílvia Pérez Cruz performed some of her most recent numbers with the Farsa Circus Band in a delightfully sensitive, delicate and subtle yet intense concert.

At FCC Victoria Eugenia Antzokia, on Wednesday July 21, La Locomotora Negra received the Donostiako Jazzaldia Award before launching into a fantastic concert and proving that, even if they have decided to retire, they’re still on great form. From the 22nd to the 25th, Jazzaldia hosted the seventh edition of JazzEñe, a festival organised by the SGAE Foundation. The event came with 4 double performances given by the crème de la crème of Spanish Jazz: Ariel Brínguez Quintet, Camerino Quintet, the great pianists Daniel García and Chano Domínguez; Smack Dab, Sumrrá, Alba Careta and the Andalusian duo Manolo y Curra.

Every morning aficionados flocked to the cloister of San Telmo Museum to attend the sold-out performances for 120 people where they were able to enjoy unplugged solo piano concerts in a unique setting with a warm and intimate atmosphere. Franco D’Andrea, maestro of Italian Jazz, charmed us with his elegance. Marcin Masecki, paid tribute to the great Thelonious Monk on the first day while taking a trip down the ragtime memory lane on the second, two concerts that will remain in the memory of all attendees. The brilliant Marco Mezquida brought the audience to their feet for a resounding ovation and Iñaki Salvador treated us to a varied programme full of nods to his admired composers, including Chick Corea, Keith Jarrett, Bach and Duke Ellington.

This year there were two concerts in Chillida Leku, on an incomparable stage, surrounded by art and nature: in a festival warm-up performance, singer Cécile McLorin Salvant delighted attendees with a music perfectly suited to the setting’s bucolic atmosphere. And on July 24th, Marc Ribot with his Ceramic Dog trio, offered a magnificent and energetic concert showing the unpredictable guitarist and singer’s most spirited and combative side.

25 free concerts were held in the Frigo Gunea and Guuk Gunea, with a great turnout of attendees who often filled all available 800 places. Here the audience were treated to the performances of 19 local groups selected for the edition and the quintets of Jean Toussaint and Éric Séva.

Txikijazz proposed 4 morning concerts, two in Guuk Gunea and another two in Kutxa Kultur Tabakalera. Boys and girls had the opportunity to join their families in enjoying the music of Hollywood Band Kids, Swingtronics, Ghost Number and Oreka TX.

This year 18 concerts were streamed; 9 from the Trinitate Plaza Keler, and 9 from the FCC Victoria Eugenia Antzokia. The concerts of the edition available on our YouTube channel (Jazzaldia – Donostia / San Sebastian) have had more than 12,000 viewings to date. In addition, this year we introduced an App, called Jazzaldia, developed by Guuk and lastly, our social media hit the total figure of 37,000 followers.

The next edition of Jazzaldia, which we hope will take place in post-pandemic conditions, will run from 21-25 July 2022.