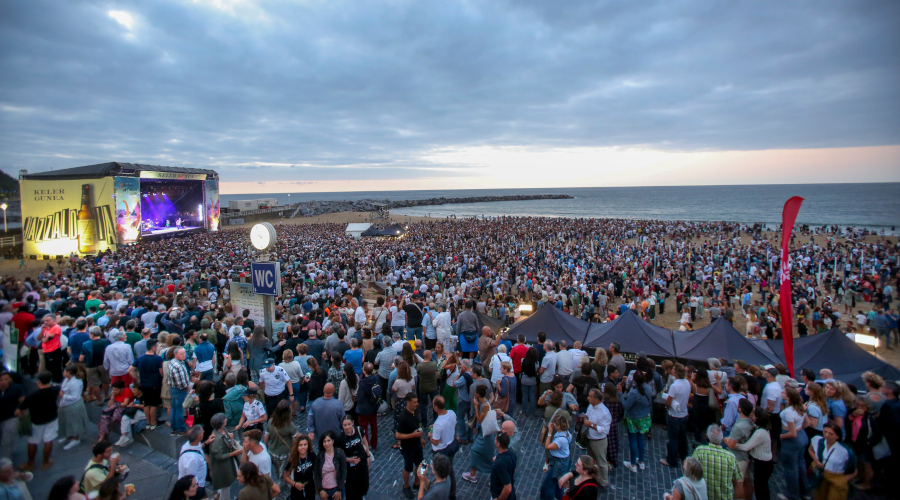 Fantastic concerts, reunions and hugs to celebrate one of the editions with most attendees in the history of Jazzaldia

The audience was back for the 57th Jazzaldia as people flocked to all of the concerts on the programme, racking up a total of 150,000 aficionados who packed out the 14 stages. All enjoyed concerts of an excellent musical quality that will forever remain on our memories, at an edition once again boasting full houses and where stages were newly up and running like the one on the beach (Keler Gunea), while the Kursaal terraces recovered their atmosphere (Frigo Gunea and Fnac Gunea) and Nauticool re-opened its doors…

The Festival thanks and appreciates the response of a public whom, enjoying the good weather, not only packed out all of the venues but, yet another year, did it with exemplary behaviour and without a single incident. The city was inundated with music for six days, hosting 79 concerts where the atmosphere was one of celebration, partying and getting back together.

The excellence of the artists and their music was repeated throughout and the great stars of both Jazz and other genres treated us to memorable concerts amongst which some of the most outstanding were: Simple Minds, who drew 42,000 people to the Keler Gunea; Mulatu Astatke, recipient of the Donostiako Jazzaldia Saria award; Hiromi, who was an absolute joy accompanied by a string quartet in the Trinitate Plaza; Iggy Pop who, at his 75 years of age, revolutionised the Kursaal Auditorioa; Vintage Trouble, who had everyone up and dancing on the beach; Craig Taborn who delighted the audience with his improvisations at the Škoda San Telmo Museoa; Marco Mezquida & Juan de la Rubia who thrilled attendees at the FCC Victoria Eugenia Antzokia; Herbie Hancock, who made it perfectly clear that he remains on fine form and that he is one of the greatest Jazz musicians of all times…

This year, packed out just like it used to be and still with numbered seating, there were 8 concerts in the Plaza de la Trinidad, where performances on 3 out of the 4 days played to a full house.

The first day in the Trinitate Plaza, on 22 July, Hiromi, who gave a magnificent concert accompanied by a string quartet, rounded off a Japanese evening opened by Miho Hazama fronting the Musikene Summer Big Band.

On the 23rd, Steve Coleman & Five Elements treated his fans to an unforgettable concert. Later, the irreverent and cheeky Louis Cole produced a show that was one of a kind.

On the 24th, Amina Claudine Myers, who had previously received the Donostiako Jazzaldia life achievement award, gave a concert paying tribute to the gospel groups of the 50s. Next up was a concert by Ben Lamar Gay, visionary, spiritual and complex.

The concerts in ‘La Trini’ ended with the sax-player Lakecia Benjamin, who brought her personal take on numbers composed by Alice and John Coltrane. And finally the edition was brought to a close by Diana Krall, whose voice, piano and stage presence reflected her sentiment of familiarity and fondness towards an audience, a venue and a city that she particularly loves and that she rates as one of the best in Europe.

The Kursaal Auditorium was packed to the hilt every day, except on July 24 when we were 400 tickets short of a full house of 1800 attendees.

With a wide variety of styles, the Kursaal Auditorioa hosted 5 concerts of excellent artistic quality. Calexico, on the first day, delighted the public as they pushed the boundaries with their music. On the 22nd, Gregory Porter and his powerhouse of a voice left us with absolutely no doubt that he is one of the world’s leading Jazz singers. Iggy Pop, indefatigable, revolutionised the auditorium jam-packed with an audience who were on their feet from the first notes, on an afternoon that will definitely go down in history as one of the most memorable. On the 24th it was the turn of Yann Tiersen who brought an impressive visual show to take us through his Electronic Set. And to end, on the 25th, the great maestro Herbie Hancock once again demonstrated that he is one of Jazz history’s greats, taking us back through some of the most brilliant numbers of his entire career.

This year, like last, the FCC Victoria Eugenia Antzokia hosted what was the 8th edition of JazzEñe. All of the concerts were attended by an average of 650 people who enjoyed the 8 very fine musical proposals brought by Oreka TX, Chico Pérez, Verónica & Javier Sánchez, Carlos Sarduy Quartet, Moisés Sánchez, Daahoud Salim Quintet, Berta Moreno and Ernán López-Nussa.

On the 25th, this time not as part of JazzEñe, Marco Mezquida and Juan de la Rubia played to an almost full house with four hands, on the piano and the organ, reinterpreting pieces by Bach in an absolutely sublime concert.

This year, at last, we were able to return to the big beach stage to enjoy nine fabulous concerts. On July 20, Simple Minds put their all into celebrating their 40 years together, and the audience thanked them by enthusiastically turning out en masse. On the 21st, Mulatu Astatke, one of this year’s Donostiako Jazzaldia Award recipients, rendered a hypnotic and evocative concert followed by Curtis Harding, who charmed the audience with his “slop ‘n’ soul”. On July 22, The Excitements strutted their stuff with their energetic soul and R’n’B, after which the beach came alive as the audience danced to the fresh and festive punk pop of Carolina Durante. On the 23rd, This Is The Kit rolled out their exquisite indie-folk while Vintage Trouble once again caused a commotion on the beach with their soul guitar as their frontman, Ty Taylor, leapt down onto the sand to sing amongst the audience. Keler Gunea was brought to a close on July 24 by the commanding Pillow Queens and León Benavente, whose lively show saw the beach turn into a huge party.

This year we repeated the format of solo piano concerts at the San Telmo Museum cloister. These completely unplugged performances offer the possibility of enjoying the piano as part of a small audience and in a magical setting such as that of the museum cloister.

Four pianists, all top league, gave five concerts, the Ukrainian Vadim Neselovskyi performed his Odesa Suite in a concert whose proceeds will go to the Chernobil Elkartea association; on the 22nd, Craig Taborn drew us into his personal world with a powerful and fully improvised concert; on the 23rd, Sofiane Pamart played pieces of her own composition to a young audience, faithful followers of the French pianist; and on the 24th and 25th, Benny Green, who is always on top form, performed two different programmes as a tribute to his admired artists.

Our chill-out space par excellence, the Nauticool, brought concerts by the French-English duo J-Silk and their soul, hip hop and electronic combo. For its part, Fnac Foruma offered the concerts of Nat Simons and Èlia Bastida & Joan Chamorro. And Garbera was the setting for five concerts, two outside and three indoors. Broken Brothers Brass Band, Patáx, The Excitements, Sara Mansilla and Bruce Barth Trío each gave concerts at this new venue.

Txikijazz made a powerful return to celebrate its 10th edition, doubling the number of stages and spectators, and retrieving the workshops for children. From 21-25 July, Arima Soul, Carla Sevilla 5tet, Swingtronics, Lucia Fumero, Les Fous and Travellin’ Brothers attracted numerous families eager to enjoy the music and great atmosphere on the different stages. Chillida Leku’s first time as a new Txikijazz venue was a huge success, gathering more than 700 people. In Garbera, those who came along to the shopping centre were able to enjoy 5 concerts of very fine quality. The fiesta closed by Swingtronics at the Fnac Gunea turned out to be a great event. The group ended its performance by coming down off the stage to dance with the delighted audience.

By venue, the percentage of sales out of the total are as follows:

This year we broadcast 14 free concerts in streaming mode, all of which have been uploaded to and can be watched on our YouTube channel.

Our social media notched up 39,400 followers.

Work is already underway on the next edition of the San Sebastian Jazz Festival, number 58, scheduled to run from 21-25 July 2023.